In this article we would like to summarize the complete story of the Ukraine relief operation. The events of the last 4 weeks have been incredibly challenging, but also emotional and exhausting for the whole team. As we call it internally: it was all very dynamic! In the last few days, there has been some time to take a deep breath and to process what we have experienced. But from the beginning…

January 2022 how it started

It all started in January 2022 with an ad on a Ukrainian job platform.  The shortage of skilled workers in Germany gave our CEO Michael Raber the idea to look for IT specialists in Ukraine. We actually had 4 promising applications and after a few interviews, Illia Borodin received an acceptance and the MJR employment contract at the beginning of February and was scheduled to start his first working day in Knittlingen with us at MJR GmbH on April 1. So far at least the theory.

A day that abruptly changed everything. Not only for us, but for the whole world. Suddenly there was war in Ukraine, in Europe. In the early morning of 24.02.22 Michael Raber received a message from our future co-worker Illia that he had already left the country with his family and was safe in Poland. A good decision, because one day later he would not have been allowed to leave the country. Of course, he did not have a place to stay yet, since his arrival was not planned until about a month later, and now he relied on the support of MJR. The accommodation for Illia and his family was found within an hour after some telephone calls & messages. On 26.02.2022 Illia and his family were now safe in Germany for the time being, had a place to stay, food and drink.

A longtime friend of our managing director Michael Raber, who has been living in Germany for 25 years but originally comes from Ukraine, sent a message to Michael. His wife and another friend with her mother and daughter were still in Kiev and wanted to leave the country for Germany as soon as possible. Since Michael Raber also has good contacts in the Ukraine and was ready to help, the whole thing took on a life of its own with enormous speed.
Suddenly, a rapidly growing chat group was formed with the title „Welcome to Germany“.

Now, for the first time, the question arose as to where accommodation could be found in the region.

One day later, on March 4, the idea first came up to travel with an aid convoy to the Polish-Ukrainian border, deliver relief supplies and bring refugees to safety by bus to the Bretten region. Our sales manager Marcel Kosel was asked by Jonas Balmer, assistant to the management of the travel agency Wöhrle, what he would think about the idea to load a coach with relief supplies and on the way back to provide refugees Ukrainians a place in the bus to bring themselves to safety in the region around Bretten. The two did not flinch for long and quickly agreed: They want to help! As quickly as possible and without many detours. That’s how things got rolling…

On March 5, then the first post on social media on the subject of Ukraine help „We pack on! And need your help!“ Together with@reisemitwoehrle and @projekteye we are organizing a transport of needed relief goods to the Polish-Ukrainian border, including a ride for refugees to Bretten in a coach.“ Also our future collaborator Illia had decided to drive again (with his private car!) to the Polish border to help on the spot and to bring some people from Ukraine to safety. Thus, between March 5 and March 13, 2022 alone, we were able to reach over 12,000 people through posts on Instagram and Facebook. It was shared for all it’s worth!

The amount of relief goods that were delivered to the sports hall Grüner in Bretten on March 9th was really enormous. It was mainly donations in kind such as food, warm clothing and hygiene items. The willingness of the people in the region to help was truly overwhelming.

It was clear that not everything would fit into the bus. And so only the things that were most urgently needed in Ukraine were loaded onto the bus until it was really full. (The rest was then driven by a truck, provided by the Bundeszentralverband Speyer – CDH-Stephanus e.V., to Ukraine on March 14th). 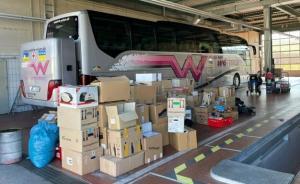 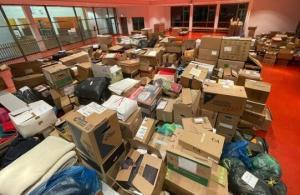 Around 4:00 a.m. in the morning the bus, loaded with relief goods, started in Oberderdingen. The main initiators Marcel Kosel (MJR GmbH), Janis Kuttler (Projekt Eye) and three volunteers (Angelika Haas, Claudia Deschner & Tim Schäfer), were on board the whole trip. At the time of departure it was not yet clear exactly how many people would come and where exactly they would be accommodated. Again: everything was very dynamic! It was only clear that people would be brought to Bretten and the region. On 10th March 2022 around 9 p.m. the convoy reached its destination after about 18 h of driving: Przemysl in Poland. There, the boxes with the donations were reloaded at night with headlamps. Here a truck of an aid organization from Ukraine and Illia and his good acquaintance had waited for the bus of the company Reisebüro Wöhrle GmbH, which supported us actively with the unloading and reloading. While the whole team loaded the donations from the bus into the truck, Illia took the two bus drivers Jakob Gerhard and Reinhard Schmid to the hotel one hour away, which was booked only 3h before arrival. Due to the lack of capacity of beds in hotels, the team decided to put only the bus drivers in a hotel, as they needed to recover for the return trip. 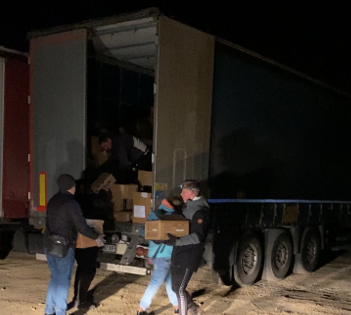 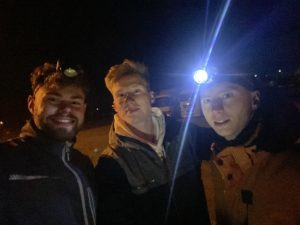 After little sleep during the night in the bus at -10 degrees Celsius (as described, only the bus drivers had a hotel), the team made its way to the border crossing, where the remaining relief supplies were unloaded or literally torn out of the hands. On the spot, the team was informed that all refugees would be transported from this border crossing to a nearby shopping center that had been converted into a refugee center via shuttle bus.

Once at the „shopping center“, the bus drivers first had to be officially registered. In the meantime, the team started looking for refugees who wanted to go to Germany, more precisely to the region around Bretten, Knittlingen or Oberderdingen. Impressions on the spot that one will never forget for the rest of one’s life, from empty exhausted faces to tears of joy/relief, everything was there. The organization on site was better than expected, there was no real plan but nevertheless everyone pulled together and could withstand the chaotic conditions.

After little sleep during the night in the bus at -10 degrees Celsius (only the bus drivers had a hotel), the bus with 36 refugee women & children could start the way back in the afternoon of March 11th. Illia was able to actively help with the organization and registration at the border. Fortunately, the journey home went smoothly and without incident. Since the refugees but also the helpers were mostly very tired & exhausted.

In the early morning of March 12th, the host families met their guests for the first time and, after a small welcome breakfast, took them to their lovingly prepared accommodations in the region of Bretten & surroundings.
Once again, a big thank you goes to the people who provided living space and accommodations at such short notice to host the 36 women & children. 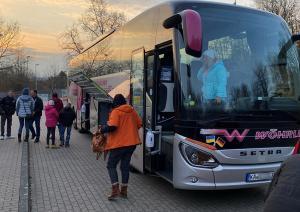 A feat of strength, that’s for sure. And it would never have happened without the motivation of the young people and the support of their companies.

Or how Marcel Kosel describes in the video: „It’s good to be on site and to help people. It’s a good feeling – just do it!“ However, a queasy feeling at night could not be avoided, for example, when explosions could be heard in the distance.

24th of March 2022 – TV from SWR reports from Knittlingen

In the morning of 22.03. (Tuesday) the phone rang in the MJR marketing office. SWR was interested in broadcasting a report on Ukrainian refugees in regional companies. After everything was clarified internally without further ado, the commitment to the SWR could be made. In a 2:30 min long report, the story was broadcast on the evening of March 24 (note: exactly one month after the outbreak of war) on SWR Aktuell in the TV evening program.

The impressions as well as the conditions on site, but also the boundless willingness to help are impressively documented in this short film about the Ukraine relief action by MJR GmbH, Reisebüro Wöhrle and Projekt Eye.

We would like to thank again all those who have supported this relief action in any way, be it with donations in kind, financial means, phone calls, muscle power and/or accommodation. Thanks also go to the companies in the region who supported us with buses, trucks, donations of diesel or in any other way.
We would also like to thank the mayor of the city of Bretten for his support in loading the bus and the storage facility for all the donations in kind in the hall in the Grüner.
Links from lokal press:
Bericht BNN v. 9.3.2022 https://bnn.de/kraichgau/bretten/ukraine-hilfe-bretten-sammelstelle-unterstuetzung-konvoi-hilfsbereitschaft-unterstuetzung
Bericht Kraichgau News v. 13.03.2022: https://kraichgau.news/bretten/c-soziales-bildung/gefluechtete-aus-der-ukraine-kommen-in-bretten-an
Bericht BNN v. 13.03.2022: https://bnn.de/kraichgau/bretten/36-ukraine-fluechtlinge-finden-in-bretten-eine-neue-bleibe 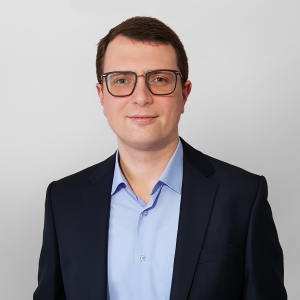 Support for our developer team 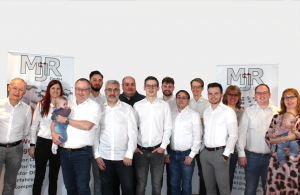 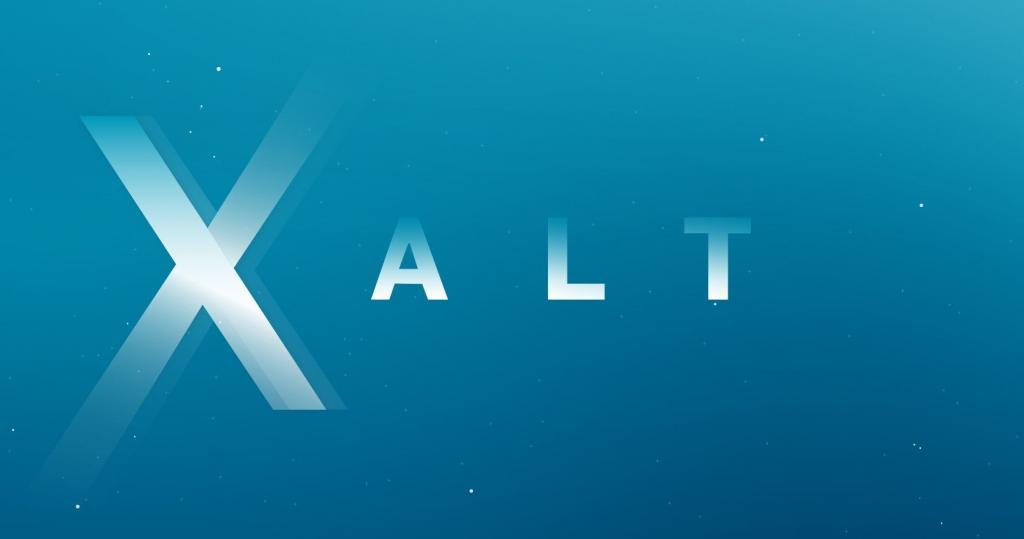 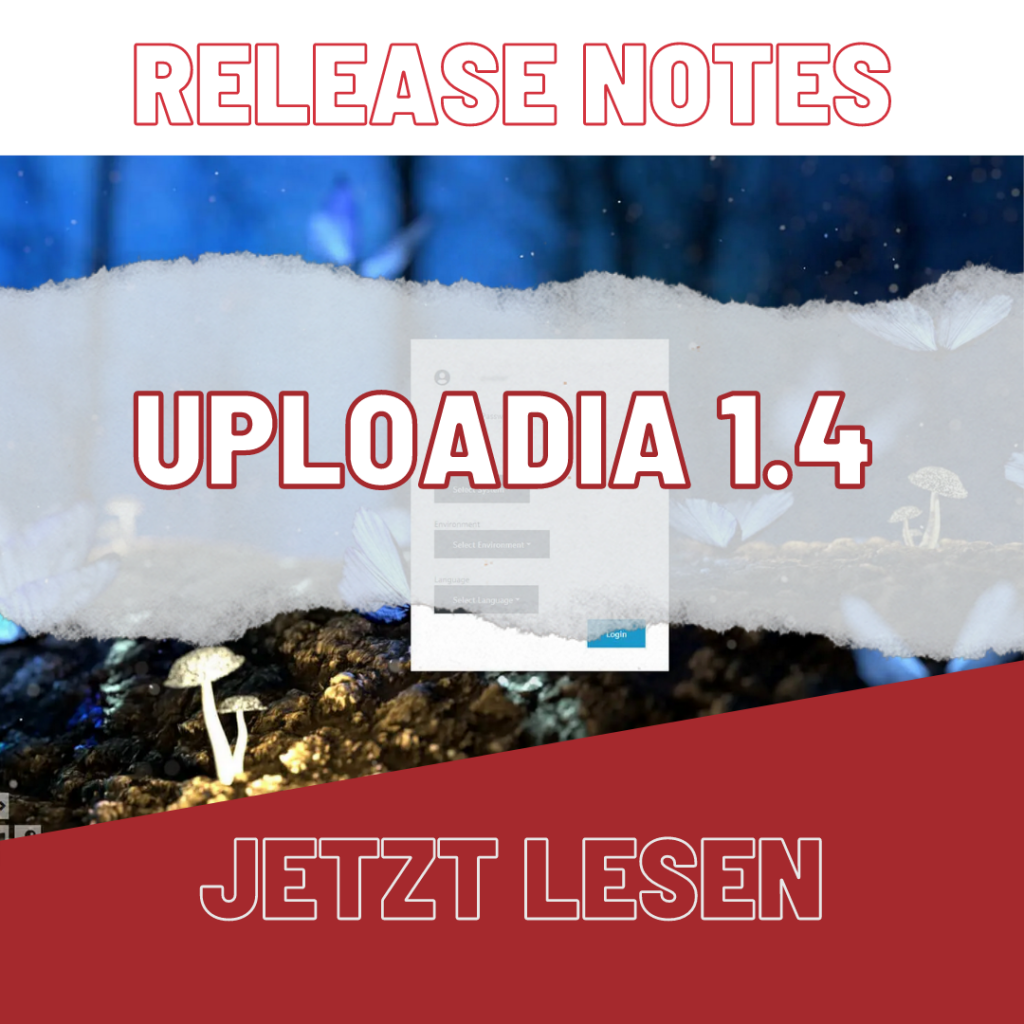